The fourth Detachment (second at Stornoway) took place between the 18th February and the 1st of March, this one saw Ken and Clark reunited. They flew 4 times together, all of which were sweeps. 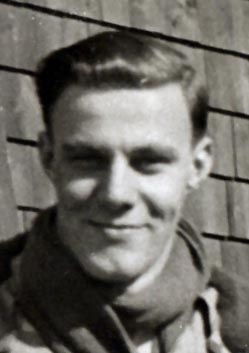 The fifth Detachment (third at Stornoway) took place between the 23rd of May and the 25th of May. This one was with a chap called Hall and they completed 1 sweep.

The Detachment to Donna Nook was of great importance, just prior to this on the 9th of June, U-Boats are first mentioned in the Log-book.

The Donna Nook Detachment commenced on the 24th of June. It was on the 25th of June that Ken took part in the 1,000 Bomber Raid over Bremen. Ken left Donna Nook with Rattery, Sgt Liptrott and Sgt W.M.Miller. Their orders were:

The 'Thousand Force' was reassembled for this 3rd raid, although only 960 aircraft became available for Bomber Command use. Every type of aircraft in Bomber Command was included. The force was composed of the following:

Parts of the force were allocated specific targets in Bremen:

The tactics were based on the earlier bomber raids except that the bombing period was now only 65 minutes. Bremen is on the wide River Weser and should have been an easy target to find. There were doubts about a band of cloud that lay across the Bremem area that day, but this was being pushed steadily eastwards by a strong wind. Unfortunately the wind dropped in the evening and the bomber crews found the area completely covered for the whole period of the raid. The limited success that was gained was entirely due to the use of leading crews' bombs, creating fires, onto the glow of which many aircraft of later waves bombed. 696 Bomber Command aircraft were able to claim attacks on Bremen with damage as follows...

12 Hudson crews from 206 Squadron took part in the raid and they flew in 4 formations of 3 aircraft, the crews were as follows...

In August 2009 I was contacted by Adriano Baumgartner who was researching RAF and Luftwaffe pilots. His research led him to Major Werner Hoffmann who was a German Ace with over 50 claims to his credit. We believe that Werner was responsible for the loss of 1 of the 2 Hudson's from 206 Squadron when he was in unit NJG 3, we believe Hudson AM762 was the one that was shot down as they crashed on land whereas Hudson AM606 is believed to have crashed in the sea. Werner's account of that night was supplied by Adriano and is detailed below.

"I flew to West of Schleswig, to wait for the bombers on their return leg from Bremen. I was guided by Ground Control (Radar) onto a target. We located it visually and came in from behind, flying almost at the same level. I chose a Lockheed Hudson that was flying away from the main box. I drew very close until he filled the gun sight. I opened fire and saw his right wing on fire. Immediately after being hit the Hudson pulled up sharply, then the aircraft spinned to the right until the impact with the ground at 2:26hrs. I continued to orbit and was guided onto another target some time later. We identified it as a Whitley Bomber (serial number V6730*). After my attack this bomber tried to runaway by diving but it was so heavily damaged that it made a forced landing some 6km North of Busem." 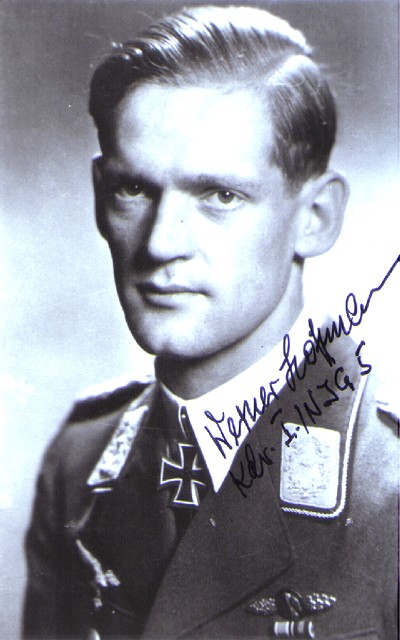 The Whitley crew were captured as POW's. Major Hoffmann had earned one of the 3rd Reich's most coveted awards: the Ritterkreuz, or the Knight's Cross as it's also known. It can be seen around his neck in the photograph above. Thanks to Adriano for providing the information and the signed photograph. 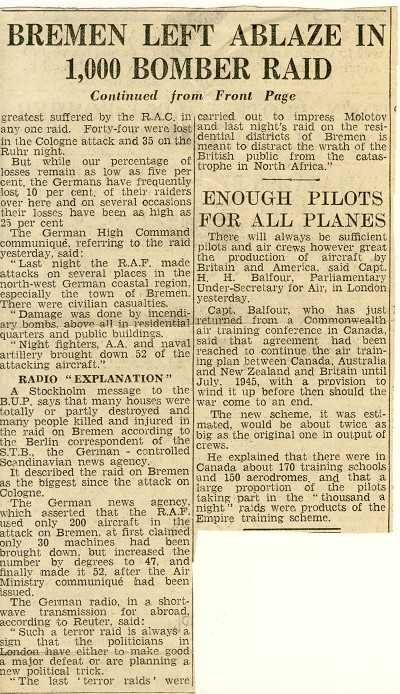 Ken moved from Aldergrove to Benbecula straight after the Bremen Raid. He was still in the 206 Squadron but they were now going to face a change, that change being the aircraft. In Benbecula they only used the Hudson 4 times, the rest of the time was spent in the Flying Fortress. It was the Fortress that was to become the main aircraft used through to the end of Ken's time in 206, which was until the 3rd of August 1943.

(Ken is the pilot you can see in this photograph)

RAF Benbecula was used from 1942 by the RAF as it was a good base to patrol and guard Atlantic convoys as well as to go U-Boat hunting. 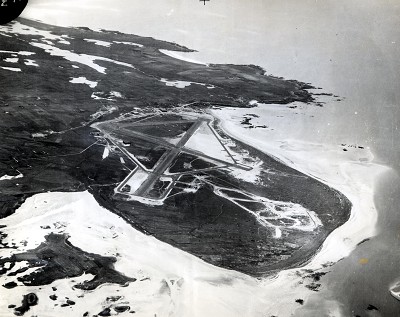 Ken (Kenneth Burdett Bass - My Grandad) married Margaret Eileen French (My Gran) in Harlow in St Marys Church in the middle of the war. It was 3 months after the 1,000 Bomber Raid over Bremen. 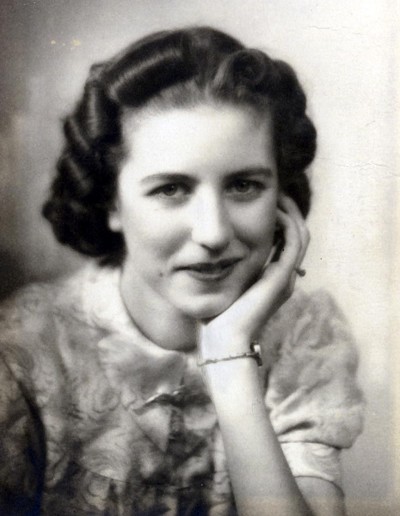 Wedding Telegram from 'Nobby' Clark and 'all the boys of 206'

Reverse of the Telegram